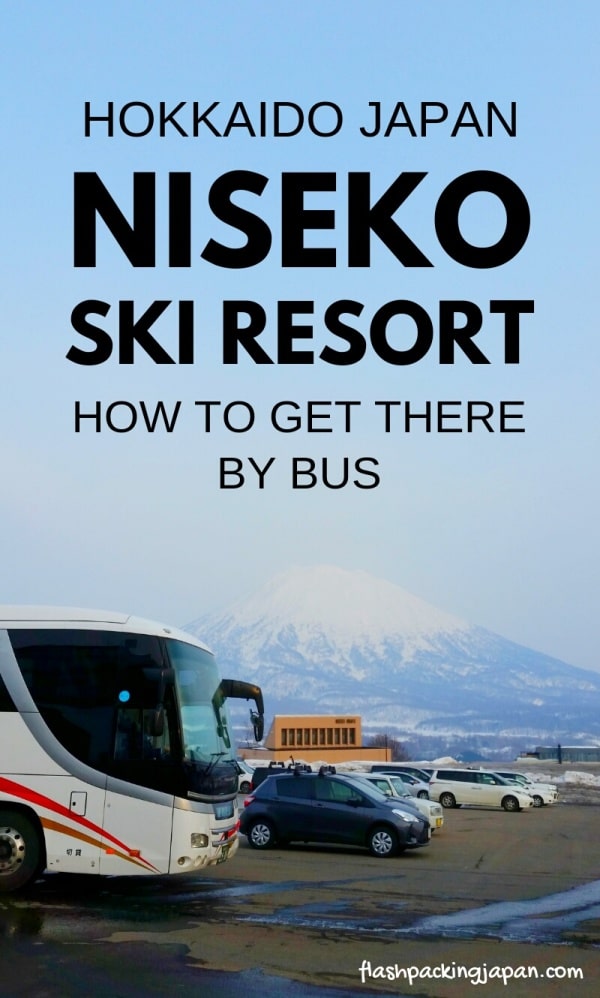 With Niseko being the top snow resort for skiing and snowboarding in Hokkaido, there are a good amount of bus timings between the Sapporo Chitose Airport and Niseko during the winter season.

What about Chitose airport to Niseko by train?

It also is an option to get to Niseko by train.

There is a JR Niseko station, but coming from the airport, the train will only get you to the JR Kutchan station, so you’ll want to make your way to Kutchan.

It will require a train transfer, and taking the train from Chitose airport to Niseko will look something like this:

The train journey from start to finish might take around 3 hours. (Not including delays due to snow and weather!)

If you’ll be traveling with a JR pass or JR Hokkaido pass, it’ll be possible to get to Kutchan by taking the JR lines, so it will be FREE!

Your Niseko hotel may also offer a shuttle from Kutchan station.

For comfort though, bus could be the better option when you’re coming from the airport, especially if you’re traveling with large luggage.

Side note! The JR pass makes it time efficient to travel around Japan by train and is a popular option among travelers! See the cost of a JR pass and how to figure out if it will be worth it for you! Also be sure to see more quick Japan travel tips if it's your first trip to Japan, as well as ideas for how to spend winter in Japan - 10 day winter itinerary with the Japan Alps and 7 day winter itinerary in Hokkaido!

About taking the bus to Niseko!

Do you need to make bus reservations ahead of time?

You do need to buy a ticket before you get on the bus.

But it IS possible to buy tickets at the airport.

That said, it’s recommended that you do book your bus ticket ahead of time, especially if you’ll be traveling during peak season.

But if you don’t make reservations in advance, you can try your luck at the airport.

You’ll have a few bus companies to choose from, and if all else fails, you can take the train. (Although train timings aren’t highly frequent, it will likely work out if you are arriving during the day.)

I took a bus from Chitose airport to Niseko and I didn’t book in advance.

I was able to get a ticket when I showed up at the airport, but I was traveling towards the end of the season. (End of March.)

I asked about high season, and I was told that the 1pm and 2pm hours are generally the most busy.

So if your flight is set to arrive in the afternoon and you’re headed to Niseko in January or February, it’s probably a good idea to book ahead of time!

What happens if your flight gets delayed?! 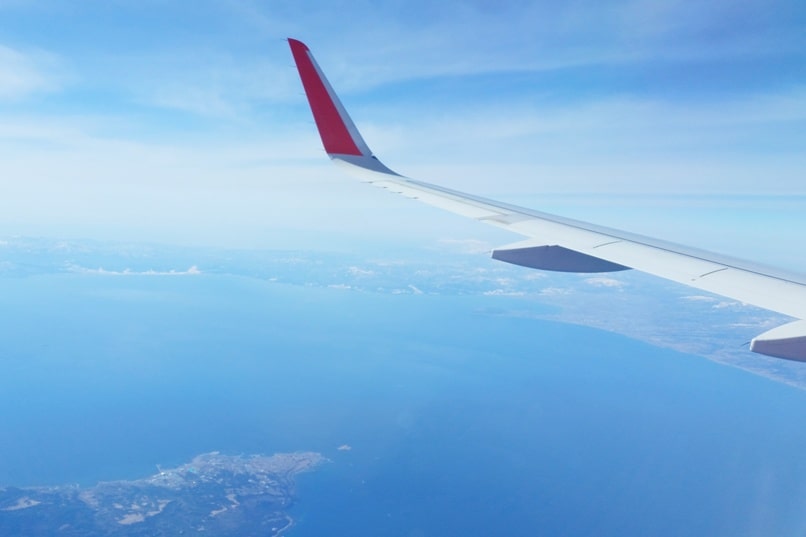 Flight delays are always a possibility, and they can be an even greater possibility when you’re flying in winter with weather-related delays!

When you’re booking your ticket in advance, it’ll be a good idea to check the clause for details.

What I’ve seen is that if your flight is delayed causing you to miss the bus, then they will put you on the next available bus. If no bus is available, a refund will be provided.

But again, see what the policy is for the bus you’ll be taking!

How much time do you need after your flight to catch the bus?

It’s also recommended that you book your bus ticket no less than 45 minutes after your flight’s schedule arrival for domestic flights, and no less than 1 hour for international flights. (But check the bus you’re going with to see their recommendations.)

But the more time you give yourself between the time you land and the time of your scheduled bus departure, the less stressful it can be too!

And, there is a “shopping world” at the airport that you can waste time at if needed. 😉

This is outside the secure area so anyone can go to this.

You can get your souvenir shopping started early, and there’s also a bunch of restaurants here too.

How much does it cost for a bus to Niseko from the airport?!

This is based on what I found when I was looking to get to Niseko.

So there may be other options, but I think this covers the basics.

For the other Niseko-bound ski buses, 4,000 yen seems to be the standard.

You can see the scheduled timings by going to the bus company websites, and that will also show you how long each bus takes to get to Niseko.

Some buses also go to the Rusutsu ski resort as well, which is kind of on the way to Niseko.

Also if you are looking for private shuttle transfers to Niseko:

How do you get to the bus once you’re at Chitose Airport?!

So you’ve made it to Hokkaido!

Once you get past baggage claim…

It will be best to make your first stop the information desk.

They will be able to direct you to the right place based on your bus company of choice. (Or the general area if you haven’t booked your bus ticket yet.)

The arrivals area kind of stretches across a long area, and depending on which gate you arrive at, you may have to go outside in order to get to the bus counter.

It’s really not difficult, but the directions will make sense once they are explained to you when you are there!

There are also a few different “bus counters” so you don’t necessarily want to go to the first one you see. 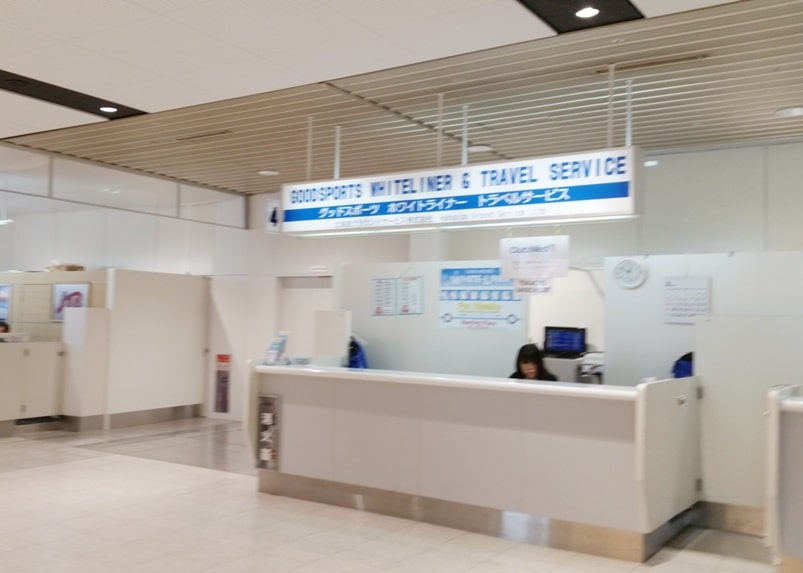 So once you have located your bus company’s counter, you’ll check in.

Then you’ll be given further directions on what to do.

I was given instructions to go over to the waiting area.

And then from there, you will soon be on a bus to Niseko!

You’ll be riding alongside a big lake for a little bit. (That’s Lake Shikotsu.)

Then about an hour in, there was a 10 minute break on my bus ride. (There’s no toilet on the bus.)

You won’t have time to sit and eat, but it’s a place you can grab some snacks to-go!

And then you’ll start to see a glimpse of Mount Yotei! 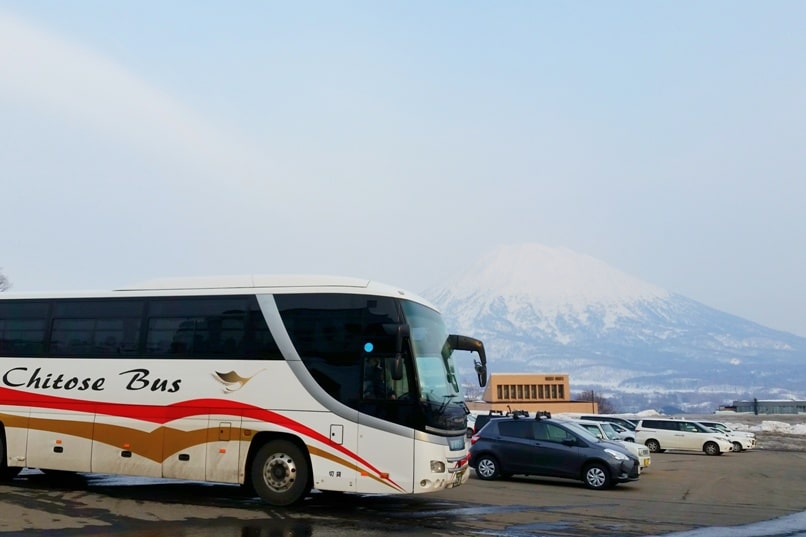