How to find cheap flights to Japan in 2019? Backpacking Japan on a budget travel tips 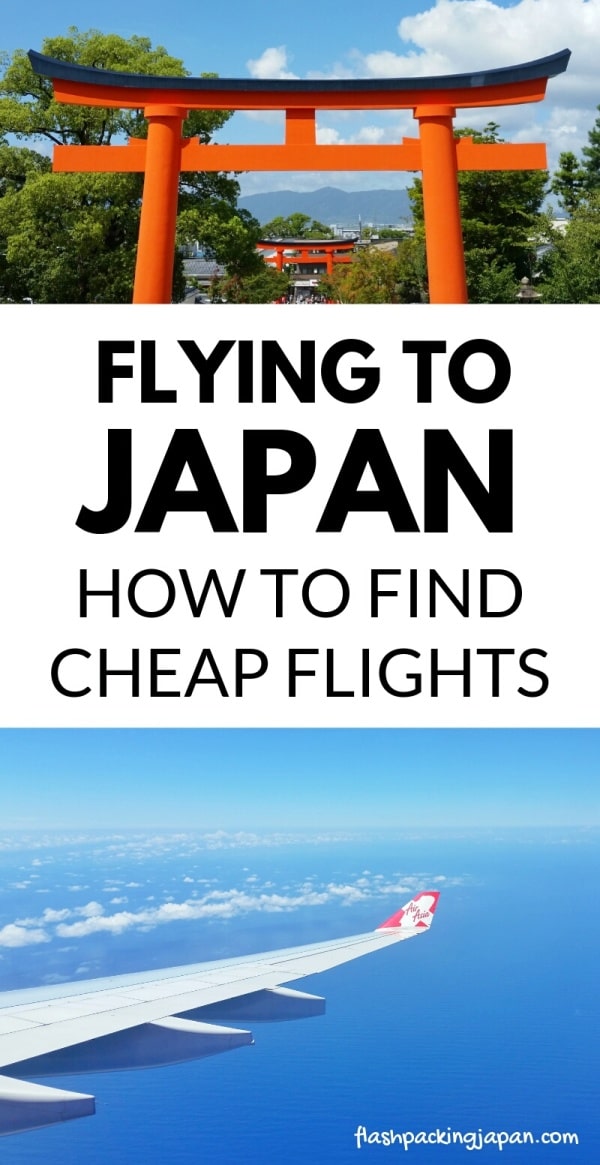 So, if you’re looking to fly to Japan, probably one of the first questions you’ll ask is…

What city to fly to in Japan?

Well, this can somewhat depend on the places you want to visit in Japan.

If you’re just starting your trip planning without a clue of specifically where you want to go, have a look at these travel guidebooks.

Also have a look at when might be the worst time to visit Japan.

And for more of Japan on the cheap, one of the top backpacker hostel chains in Japan is located in some of the top places to visit in Japan too.

That said, the most popular route for a first-time trip to Japan is to follow the “Golden Route,” and this can include Tokyo, Mt Fuji, Kyoto, and Hiroshima.

With this in mind, if you’re flying internationally on a long-haul flight to get to Japan, there are 3 main cities to know about:

Of these cities, Tokyo and Osaka have major international airports in which you may be able to find the best flight deals. The closest airport to Kyoto is in Osaka.

So the main airports on the Golden Route of Japan are the airports in Tokyo and Osaka:

Haneda airport is the more convenient airport when you’re staying in Tokyo.

But with Narita airport being a major international airport, you’ll find plenty of transportation options to get to the main part of Tokyo from Narita too.

So basically, flying into either airport will be just fine. 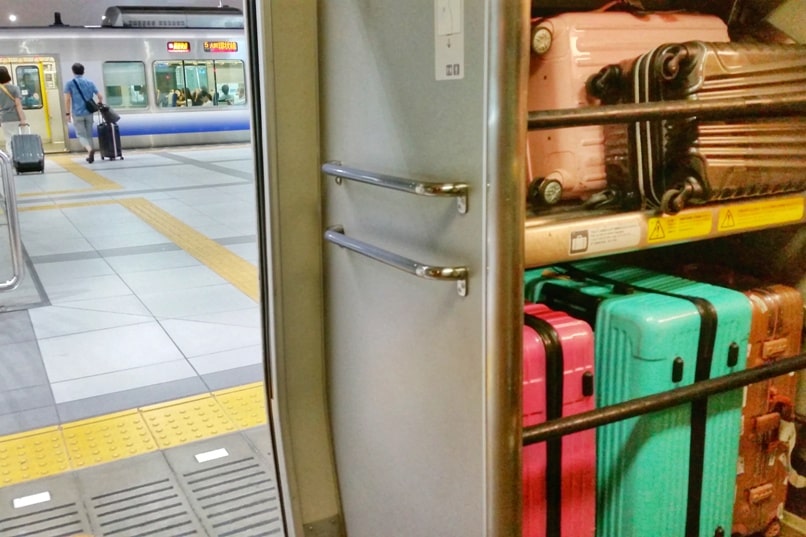 Airport train! No matter which city you fly into, you’ll find a pretty convenient way to get to the city.

If you will be visiting both Tokyo and Kyoto (common on a first trip to Japan), it could be a good idea to search for flights from both Tokyo and Osaka.

One more airport that you may look into:

Depending on your Japan trip itinerary, you may also consider flying into Nagoya. Delta Airlines has some direct flights to this airport.

Nagoya is not too far from Osaka or Kyoto.

And it can be an ideal base for exploring the Japan Alps too, if you want to get off the typical route of Tokyo – Mt Fuji – Kyoto – Hiroshima a little bit.

Flight deals to Japan from U.S. 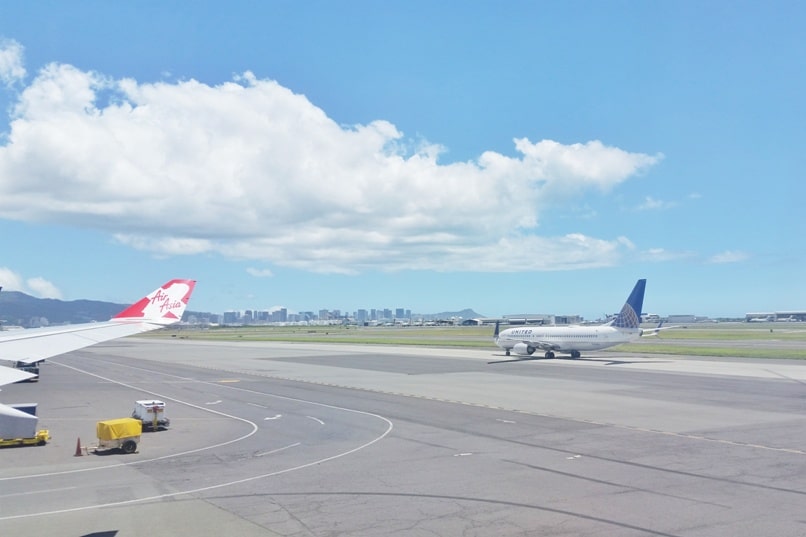 Sometimes airlines will have flight deals listed on their websites.

You may consider looking at some of these airlines to fly to Japan:

I haven’t specifically used either of these travel companies, but you seem to be able to be alerted sometimes if certain airlines are having a deal on flights to Japan.

So you might consider signing up for their newsletters:

These are both Japan-based companies.

Another newsletter that you may consider signing up for to be alerted of cheap flights that is NOT Japan-specific is Scott’s cheap flights. (This is primarily for flights from the U.S. and Canada.)

Here are a few examples of e-mail alerts on flight deals for Japan. 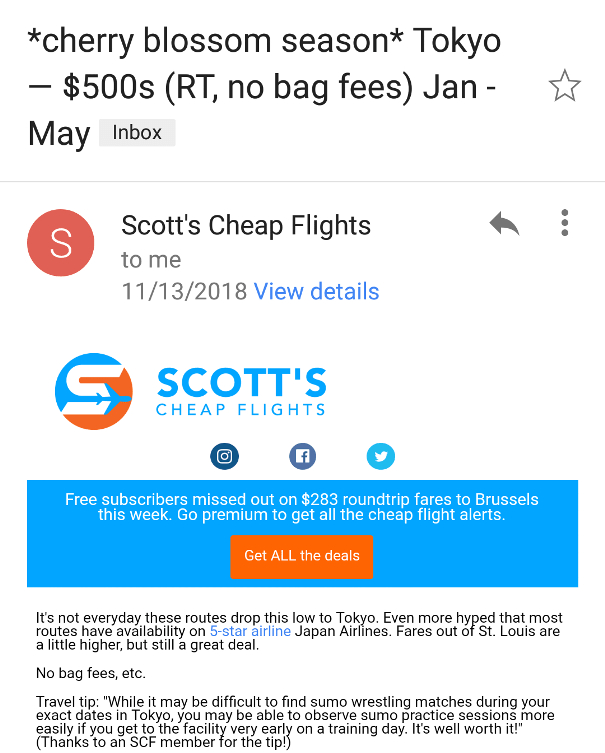 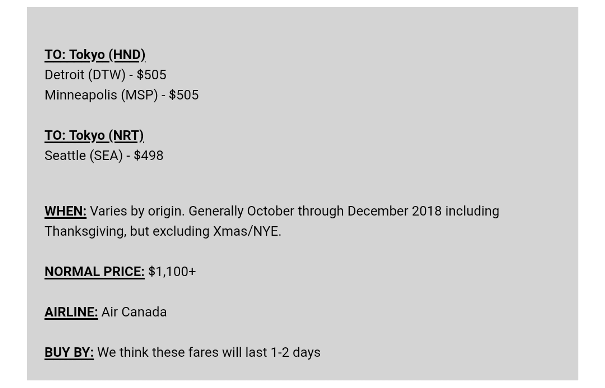 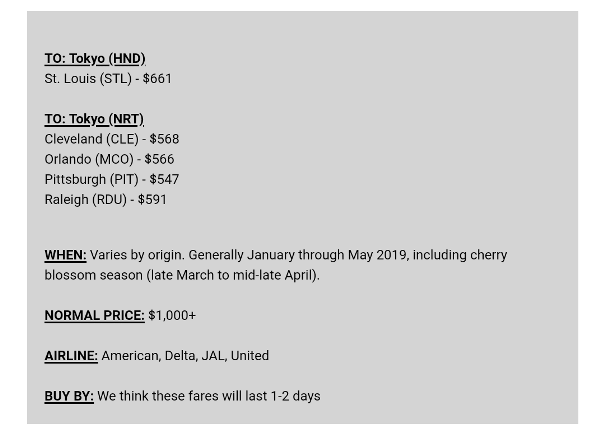 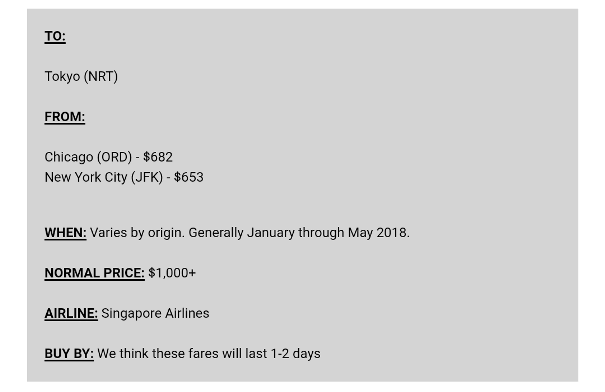 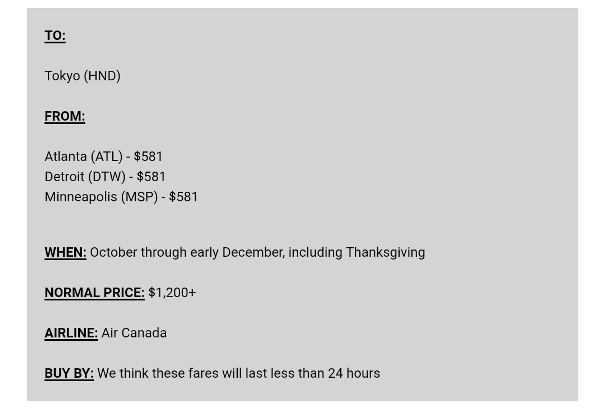 You can get e-mail alerts like this for free by signing up for the newsletter.

There’s also a paid “premium” version in which you will be alerted of a few extra deals.

If you go for the premium version, you can also set up your home airport to only be alerted of flight deals from a specific airport.

Will this help you find a good deal on a flight to Japan?!

Well, some of this DOES have to do with luck, as well as when you go to Japan.

But if you do luck out, the $40 annual fee will surely pay itself back, especially if you’re traveling as a family.

How I booked my recent flight to Japan!

So my preferred website for looking up cheap flights is kiwi.com, and now I am a partner of them too.

Nowadays, it’s the first place I look when I’m searching for flights to Asia, from Asia, and within Asia for travel between countries.

Basically they do the flight hacking for you so that you don’t have to buy separate tickets.

Search for flights to Japan!

Add in your departure airport below!

If the filters aren’t working out for you below, then try searching here.

Booking direct vs booking with kiwi.com

Well, booking direct is my preferred way of booking flights.

But sometimes that doesn’t always offer the cheapest flights.

And I’d rather save some money on flights to Japan. 😉

But how do you know when it’s worth it to book with kiwi.com instead of booking direct?

This is pretty easy!

Look at any given flight itinerary, and see who covers the flight connection if you miss it. 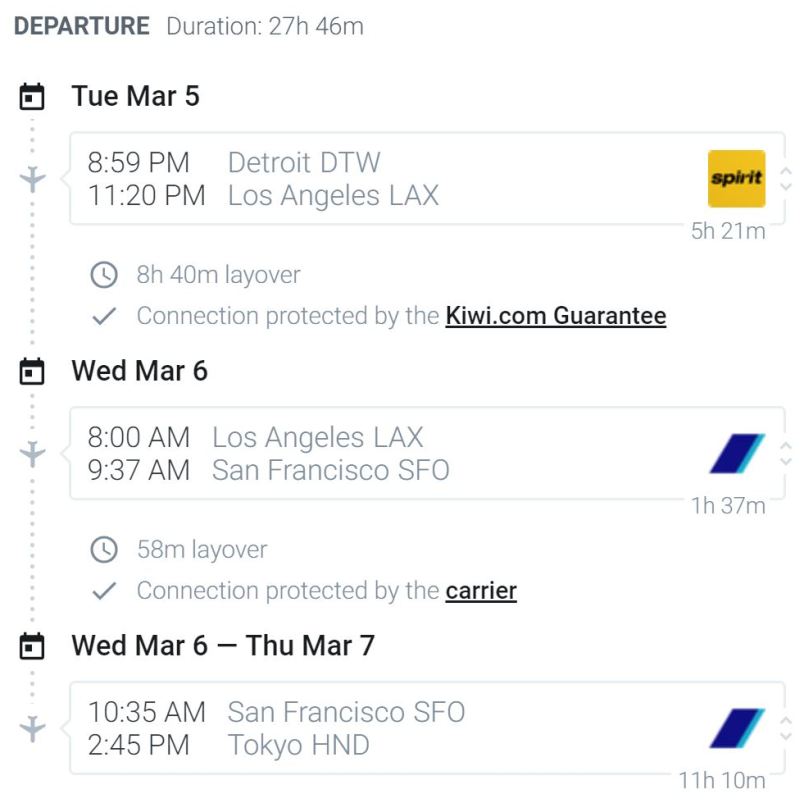 So in this case, the search has found the individual flights from Spirit Airlines and ANA to put them together to give you the cheapest ticket possible to fly to Japan.

So if you don’t make it to Los Angeles in time for your next flight because of your Spirit airlines flight, then kiwi.com will find you a new flight.

Sometimes, they may also find individual flights even on the same airline are actually separate tickets.

In this case, you may find that it’s still kiwi.com that will cover a missed connection. 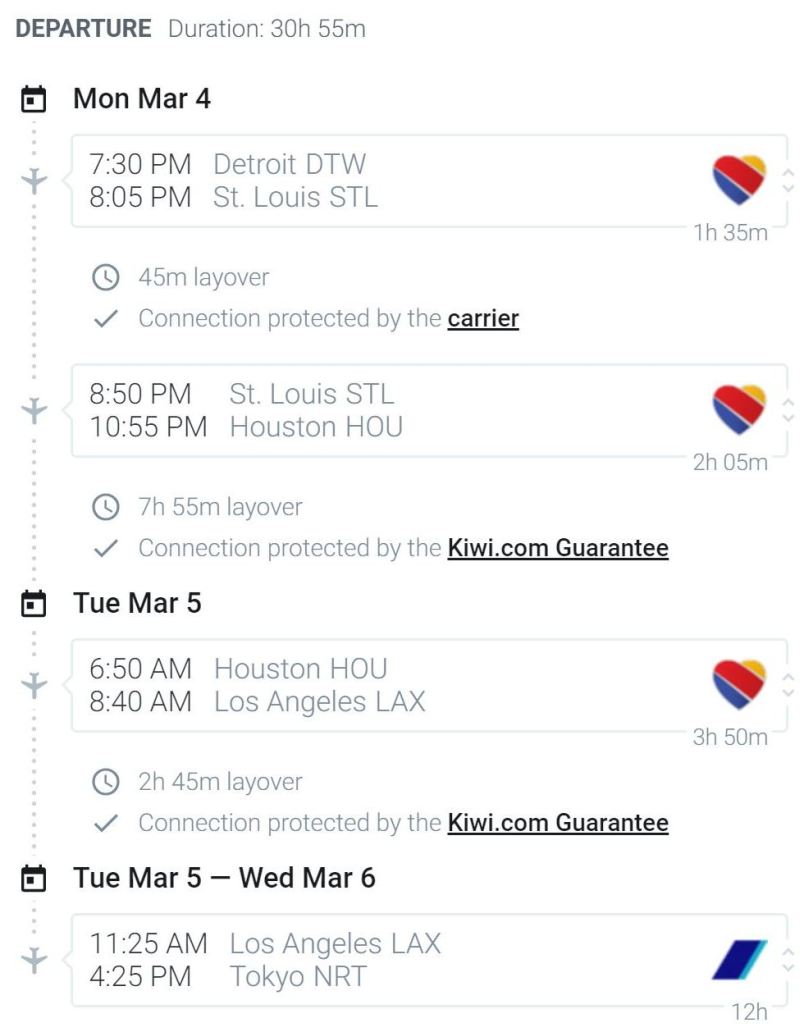 So the other thing to keep in mind when you are booking individual flights like this on the same flight itinerary through kiwi.com is that you may have to check-in again once you are at another airport.

This is especially important if you are checking in any baggage.

In which case, you may need to go to baggage claim to pick up your bags before you’ve reached your final destination, and you could be hit more than once for baggage fees.

So ideally, you’d be traveling carry-on only when you do this. Although it’s not necessary, it can make things easier.

If you don’t plan to go carry-on only for your trip to Japan, you’ll also want to be sure to check what the baggage fees are for the airline before you book.

And depending on the airline (like AirAsia), you want to make sure you pay for this before you show up to the airport. It can cost more if you pay at check-in.

You may also see search results that don’t display any “kiwi guarantee” on the itinerary. 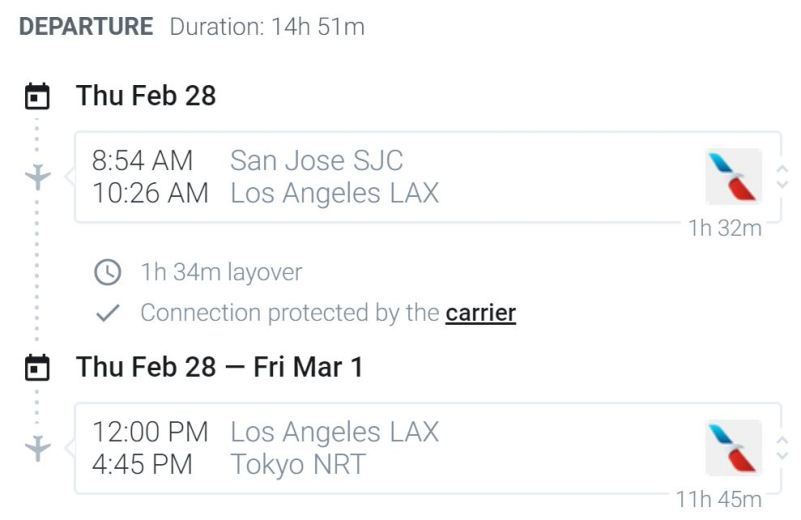 For these flights, you can book through kiwi.com, or you can also check the website directly to see if the price is the same.

So in this case, you can look to book directly with American Airlines to fly from Los Angeles LAX to Tokyo NRT.

What does the “kiwi guarantee” really mean?!

In short, if you miss a flight that’s covered on the guarantee, you’ll be re-booked onto another flight at no extra cost to you.

So then more importantly…

Does the kiwi guarantee work?!

Well, I’ve only had to use the kiwi guarantee once, and it worked for me!

So there was a typhoon that resulted in an airport closure.

This airport closure happened on the day I was supposed to fly out of Japan. (This is also a good reason to get travel insurance for natural disasters! My food and accommodation was covered for my extra days in Japan.)

I booked my flight to/from Japan through kiwi.com.

It was an AirAsia flight from Osaka KIX to Honolulu HNL, and then an Alaska Airlines flight from Honolulu to the mainland United States.

Well, my flight from Osaka got canceled because of the airport closure which means that I missed flight from Honolulu.

Eventually what happened was that my flight to Hawaii was re-scheduled for a few days later from another airport. (And my travel insurance covered the transportation to the alternative airport too.)

Then once I was in Hawaii, I called kiwi.com and they scheduled a new flight and booked me in a hotel since my flight wasn’t until the next day.

Now, I was on the phone with them much longer than I would have liked, but in the end, I was happy that the kiwi guarantee DID work!

It’s important to know that kiwi.com will ONLY reschedule your flight after you have actually missed the flight AND you are at the airport from which you need a new flight.

So even though I knew before I left Japan what time I would be arriving in Honolulu, I could not get a new flight booked until I actually landed in Hawaii.

See here if you can find a cheap flight to Japan!

Have a look to these cities along Japan’s golden route to get you started! 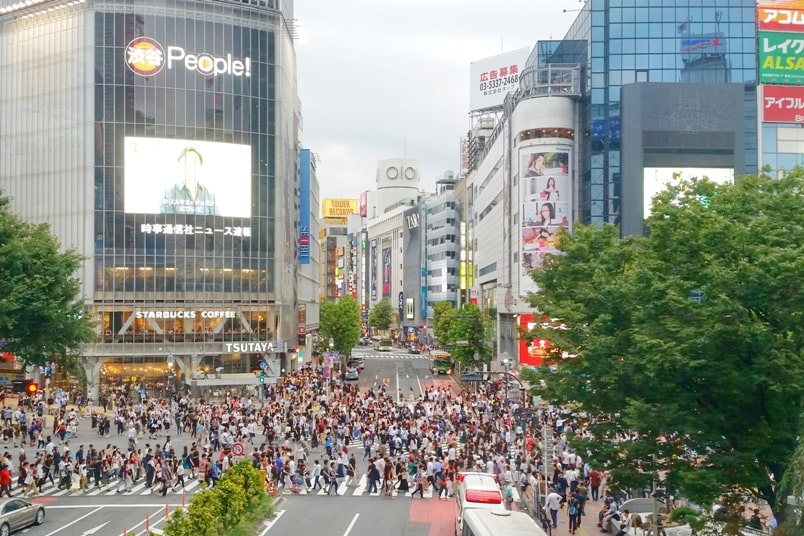 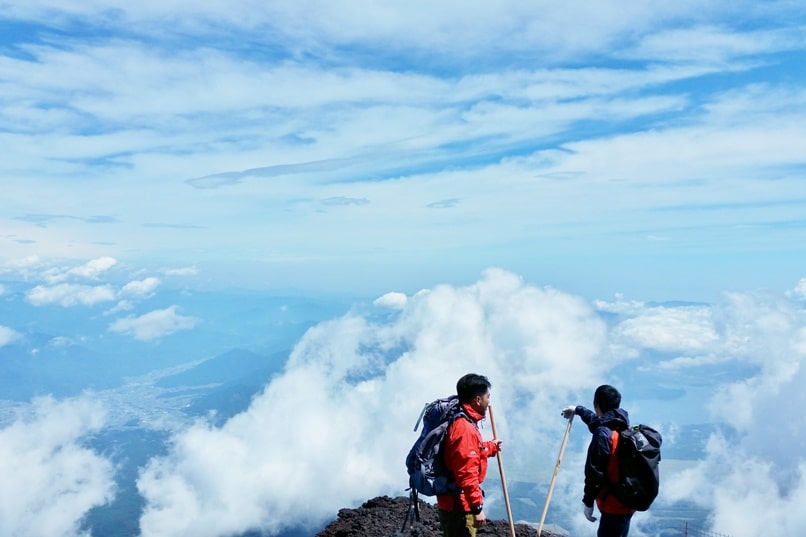 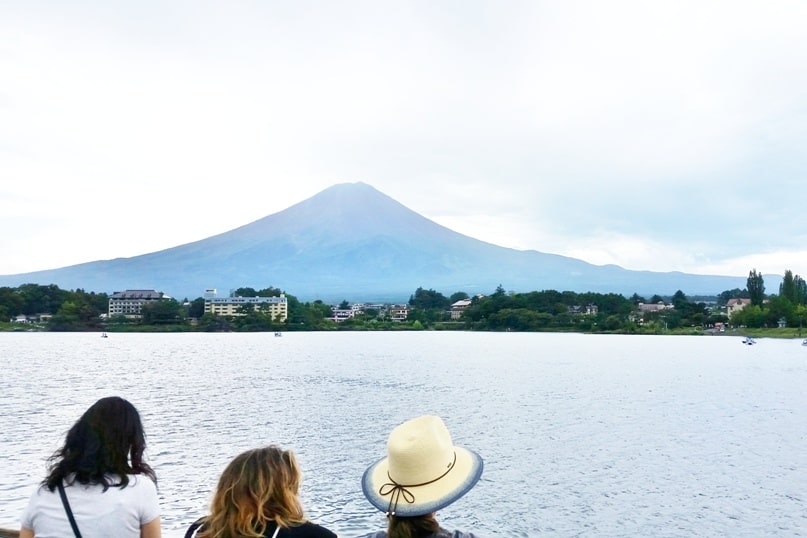 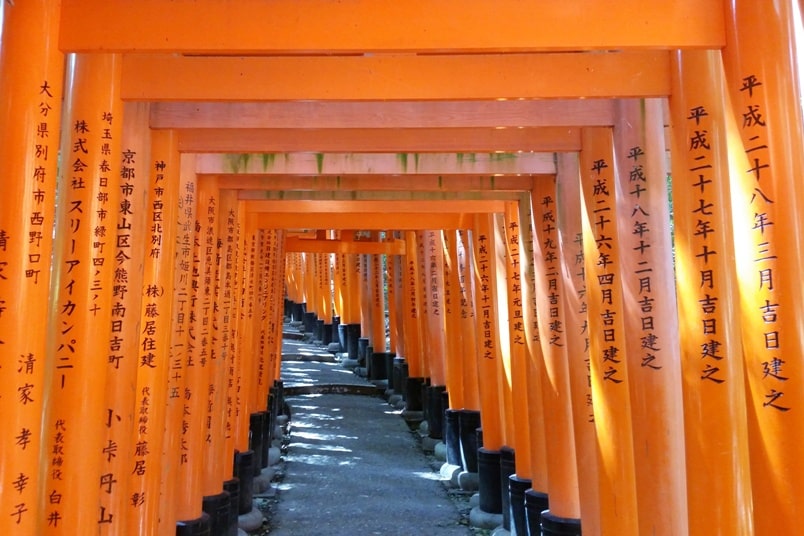 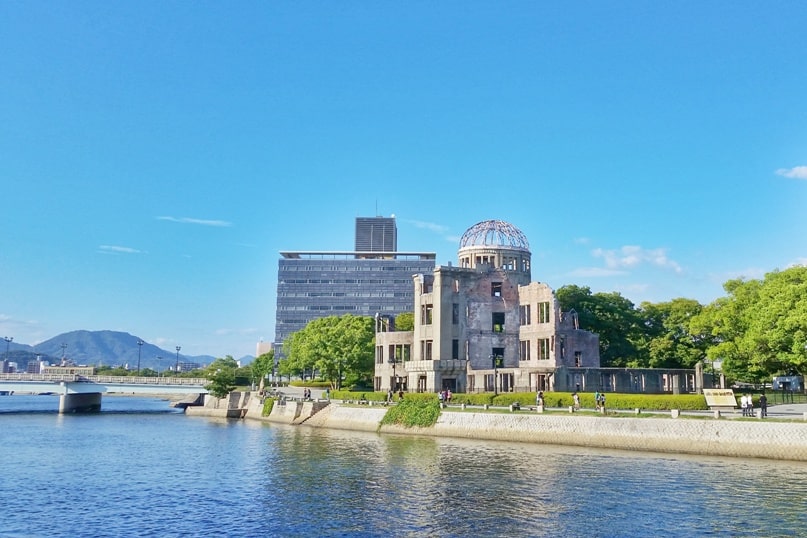 And to find more places to visit, also have a look to destinations that have cheaper places to stay!

And be sure to check out some of the best travel guidebooks so you can start planning out your activities! 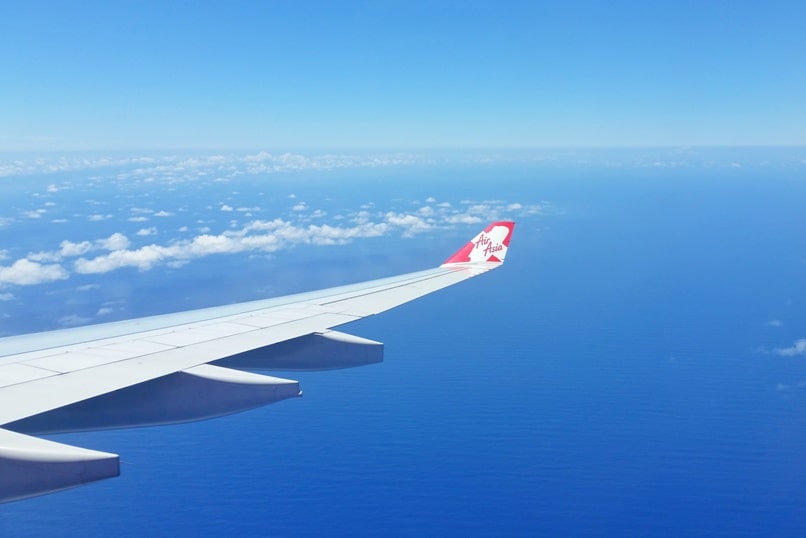