There’s a lot of walking involved in this 2-day Nagano itinerary as I did it.

The snow monkey pass isn’t available year-round. So while you can do this itinerary any time of the year, it will require buying individual transportation tickets when there’s no pass available.

You can check this website for available dates. For the near future in 2019, it lists that no snow monkey passes are available again until December 7, 2019. (Passes were stopped being sold on September 30, and none in October and November.)

Per the website, snow monkey passes can’t be bought online. If you’ll start your trip in Nagano, you can buy your snow monkey pass at the Nagano dentetsu station, which is basically located in the basement level of the regular Nagano Station, the main train station. So you can buy the pass on the day that you want to start using it!

It seems that in the not-so-distant past, this pass was only a 1-day pass. When I got it, it was a 2-day pass, with that being the only option available. I’m not sure if they will continue to keep it as a 2-day pass, but in any case, this 2-day Nagano plan below can give you ideas! 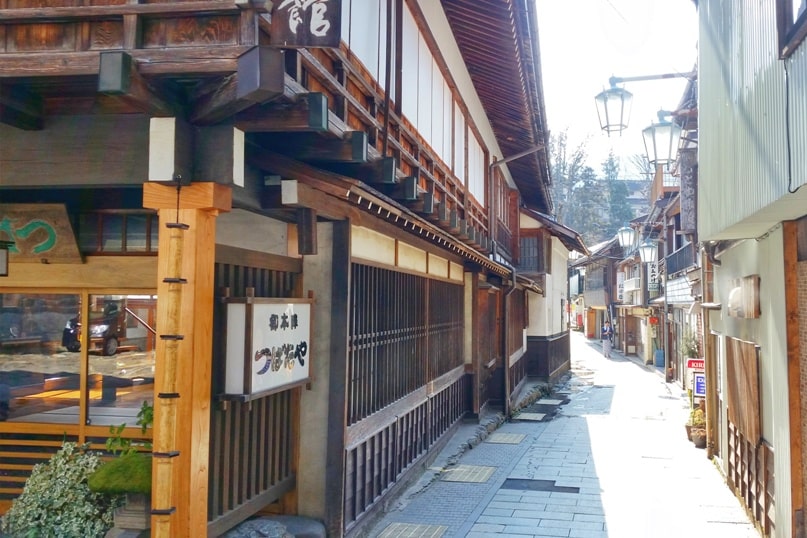 When you buy your snow monkey pass, you’ll get a little brochure or sheet of paper, and this will also include tips on where to go and how to get there. Otherwise, Google Maps is a reliable way to figuring out how to get around.

Public transportation between the places listed above is all included, and so is the entry fee to the Jigokudani snow monkey park.

How much does the snow monkey pass cost?

There is only one snow monkey pass you can buy, and that’s the 2-day pass.

With the round-trip between Nagano and the monkey park, the price will cover itself!

Planning a trip to Nagano in the winter

Nagano is the name of a prefecture (similar to a state or province), and it’s also the name of a city. For this 2-day Nagano itinerary, it’s based in Nagano city.

A 2-day Nagano itinerary can be a perfect part of a 10-day Japan winter itinerary!

You can start in Tokyo, and then from the Shinjuku bus terminal in Tokyo, you can take a bus from Tokyo to Nagano. There’s a shinkansen bullet train too if you’ll be traveling with a JR pass. The train will be faster, but the bus will be cheaper if you’re buying tickets individually.

After 2 days in Nagano city, you can then take a bus from Nagano to Hakuba. Hakuba is also in Nagano prefecture, and it is a popular ski and snowboarding destination. Even if you don’t ski, Hakuba can be worth a visit if you’re after views of snow-capped mountains. Hakuba is in the northern Japan Alps.

Where to stay in Nagano

A little bit more about 2 days in Nagano with a snow monkey pass!

This is what I did with the snow monkey pass in March 2019! You may decide to do things a little differently, but here are some ideas to get you started!

Arrive at Nagano Station to buy the snow monkey pass

So you’ll head underground to get the snow monkey pass. You can follow the signs from the front of the station to “Nagano Dentetsu Station.”

From there, there’s a manned booth near the ticket gate, and that’s where you can buy the pass. You’ll probably see signs for the snow monkey pass.

Then, once you’ve bought your ticket…

The bus stop for the Jigokudani monkey park is also basically at the train station, on the back side.

From the Dentetsu station that you’ve bought your snow monkey pass, you can follow signs to the east exit, and then to the bus stop.

Wait for the bus to arrive

There were 2 bus stops right next to each other that were labeled as the snow monkey park bus stop. This is right near the taxi pick-up area. You can just wait in this general area for the bus to show up. At some point, people might start to line up. There might also be someone around that’s wearing a “nagaden” jacket or something, and that can be a good person to ask too. Nagaden is the bus service to the monkey park.

There’s a convenience store near the bus stop, so if you find yourself with some extra time, you might want to go and buy some snacks and drinks for the day.

Get on the bus and enjoy the bus ride to (near) the monkey park!

You’ll show your pass and this will serve as your bus ticket.

The bus ride is about 1 hour. 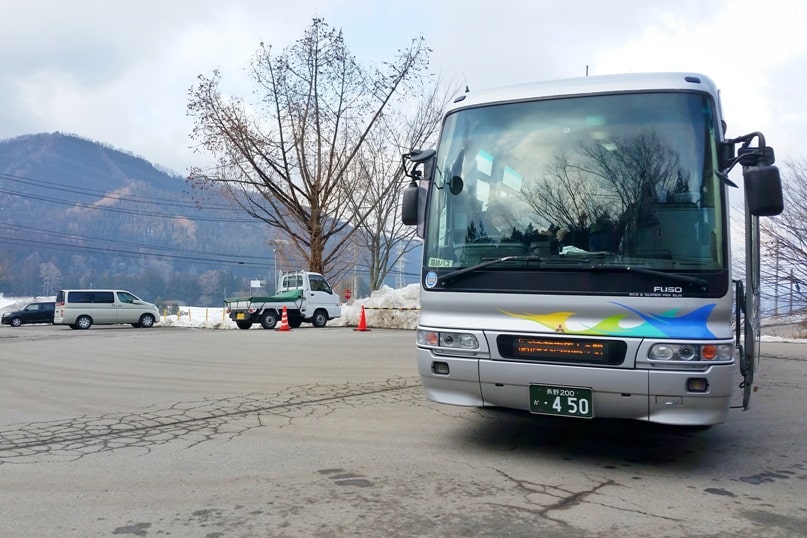 The bus won’t drop you off immediately at the park entrance. This might be about a 30-40 minute walk, including on a dirt trail. When I went, since there was some snow melt, it also made for a muddy trail in some parts. You can rent rain boots (aka waterproof shoes) at the shop near the Jigokudani bus stop if you’d rather not take the chance on getting your shoes dirty.

After the monkey park

Otherwise, if you don’t want to walk as much, you can get a direct bus back to Nagano, or you can get another bus that will go in the direction of Yudanaka Station, and I think you can stop off at some places along the way too.

But walking wasn’t so bad!

You can find lots of onsen (hot springs) here, in the form of public and private. There are onsen foot baths too.

See more photos from my walk around Shibu Onsen village. You may also consider staying a night here at a ryokan, a traditional Japanese-style ryokan.

After passing through Shibu Onsen, I continued the walk to Yudanaka Station.

There was a short hiking trail along the way, called “issa walking course” so I made a side trip for a hike in the woods.

If you want to make time on the first day, you can stop by Obuse on the way back from Yudanaka Station. Obuse is located between Nagano and Yudanaka.

Train from Nagano to Obuse

There is a direct train from Nagano to Obuse, which is the express train. The timings for this train are more limited. Otherwise, there’s the local train that does require a transfer.

You can consult google maps to see which train to take, and it could turn out the local train will get you to Obuse faster even with the transfer, depending on how long you need to wait for the next express train departure.

I took the local train to get to Obuse.

Walk the streets of Obuse

Obuse is a small town known for chestnuts. You’ll find lots of chestnut-flavored products around.

Aside from that, this is another place where you can walk the quiet streets of Japan.

See more photos from my walk around Obuse town.

This is Nagano’s famous temple. If you get off the train from Obuse at Zenkojishita Station or Gondo Station, it will be about a 10 minute walk to the temple.

At some point during your time in Nagano, make it a point to eat the Japanese soba noodles!

While you can find soba all across Japan, it’s especially famous in Nagano.

You’ll find soba specialty shops all around Nagano, including near Zenkoji Temple.

If your timing is good, you might even be able to see from the street the preparation of soba!

And there’s a pretty full 2 days in Nagano!

Also be sure to see more places to visit in Japan around Nagano!

HAPPY VISIT TO NAGANO WITH A SNOW MONKEY PASS! 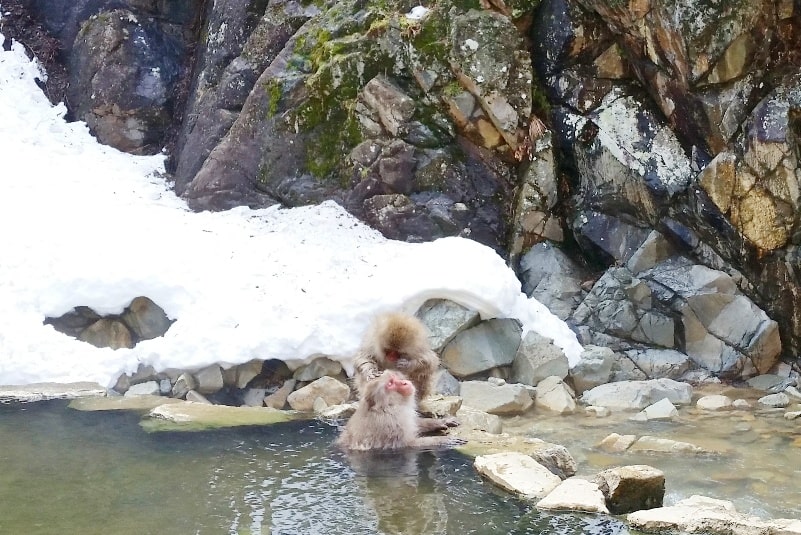