Should you go from Tokyo to Kyoto bus or train?!

The difference between taking the bus or train is really about time.

If you go take the shinkansen bullet train, you can get from Tokyo to Kyoto in 2.5 hours.

Going by bus is basically an all-day trip or an overnight trip. My bus ride from Tokyo to Kyoto was around 7.5 hours.

So if you go from Tokyo to Kyoto by train, you’ll basically give yourself an extra half day to explore Kyoto once you get there since you’ll be able to get there much quicker, as compared to the daytime bus.

So if you’re limited on time, it can be worth it to take the train so that you can fit in more activities.

If you have several weeks in Japan and don’t mind a day of doing nothing, then the daytime bus might be worth it to you too.

I generally can put up with overnight buses in India.

But that’s because they are sleeper buses and give you a much better chance of being able to get at least a few hours of quality sleep.

In Japan, the overnight buses are reclining seats.

I guess they recline somewhat more than normal, but I felt like I really wouldn’t be able to sleep well even in a semi-upright position so I decided to go with the daytime bus.

In theory the overnight bus would also mean you don’t waste time in transit which means it gives you the chance to explore more of Kyoto since you’re not traveling during daytime hours when you could be out and about.

But if you’re not able to sleep well on the bus overnight, then you might not feel like doing much the day you arrive in Kyoto as you might want to catch up on sleep!

But the most budget-friendly option to go from Tokyo to Kyoto would be to take the overnight bus. It’s cheaper than the train, and you’ll save a night on accommodation!

Where to buy a bus ticket to Kyoto

It’s possible to buy bus tickets to Kyoto at the Shinjuku expressway bus terminal. This bus terminal is THE main bus station in Tokyo for long distance buses. There are bus ticket machines, as well as a manned bus ticket counter.

It’s also possible to buy bus tickets online. If you don’t have as much flexibility with your travel dates, or you don’t want to have to worry about not getting a bus ticket because it’s sold out, it could be better to buy tickets online. Or you can go to the bus terminal a day or 2 in before to buy your ticket.

There are a few different bus companies, and I just went with a JR bus.

There wasn’t really any good reason for specifically choosing a JR bus except that “JR” is familiar!

If you buy your bus ticket online, you just need to have the original e-ticket available to show on your phone before you get on the bus.

Sometimes a screenshot might not work if they need to scan the QR code or something.

How much does a bus ticket cost for Tokyo to Kyoto?

The JR pass typically doesn’t cover long distance expressway or highway buses even if it’s a JR bus. (There is a local JR bus in Kyoto that you can use a JR pass for though!)

In this case of going from Tokyo to Kyoto it doesn’t really matter much, since if you have a JR pass, it’ll be best to go by train!

Very generally speaking, a 7-day JR pass will likely be worth it if you plan on using it for 2 long distance trains in the 7-day period. A Tokyo to Kyoto shinkansen train ride would be considered 1 long distance train ride. See the current cost of a JR pass from an official JR pass vendor. (partner website)

If you won’t be traveling with a JR pass and are considering taking the shinkansen train, it’s possible to buy individual train tickets. This might cost around $120.

The shinkansen train can be a time-efficient way to get around Japan! That’s when the JR pass can totally be worth it. But when you won’t be traveling with a JR pass (and sometimes even when you are), long distance bus travel can be an option too!

See some places to visit by bus in Japan:

If you buy your bus ticket online, there might be different options for where you can board the bus in Tokyo. I generally find it to be easiest to board the bus where the bus originates. Most buses from Tokyo to Kyoto probably originate at Shinjuku. This is where I got on a bus to Kyoto.

Shinjuku Station is the main train station in Shinjuku.

And it’s right next to the Shinjuku expressway bus terminal.

But Shinjuku Station is BIG!

So unless you’re staying pretty near the train station/bus station and you’ll be able to navigate with (relative) ease since you’re somewhat familiar with Shinjuku Station, it’s best to give yourself plenty of time before your bus departs.

I was coming from Asakusa by train and the train station I arrived at in Shinjuku was one that connects to the main Shinjuku Station. The easiest way to get to the bus terminal side of Shinjuku Station seemed to be to actually go through the ticket gate to walk through the station, as there was a sign indicating to do so. This did cost an extra 140 yen just to walk through the ticketed area. I swiped in with a PASMO card, and swiping out gave an error so I had to go see a person near the ticket gate to manually charge the card.

This might sound confusing, but once you get to Shinjuku Station, basically just follow signs for the bus terminal! The point is that Shinjuku Station is big and you’ll want to give yourself extra time to get around the station!

If you don’t see signs for the expressway bus terminal, you can ask someone which direction to go. There are manned booths right next to most ticket gates.

So once you get near, you’ll see that the bus terminal signs point you up to the 4th floor.

And if you take the escalator up from the JR Shinjuku Station (the train station), then once you get up to the 4th floor, you’ll see sliding doors to enter the waiting area of the bus terminal. 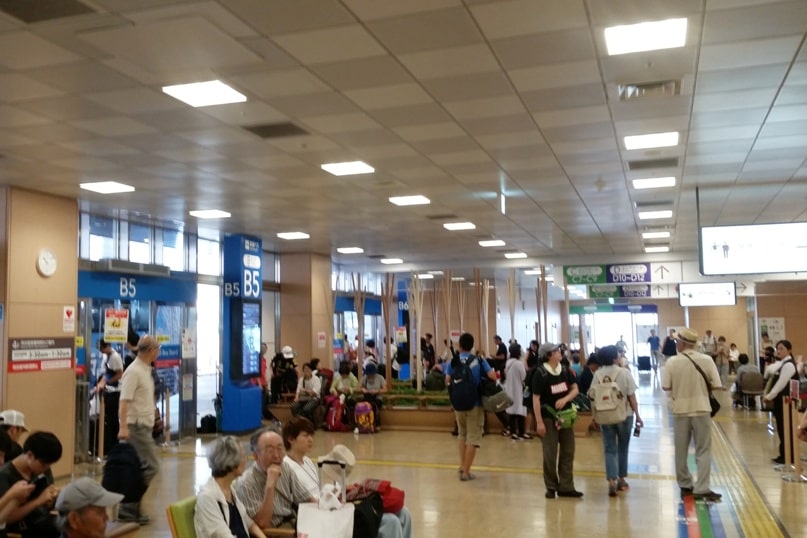 There’s also an elevator that you can take up from the Shinjuku Station side, and this will also take you up to the bus terminal floor, but outside.

Once at the bus terminal, you can figure out what platform your bus to Kyoto departs at.

You can find a signboard with a list of upcoming departure timings. It might take awhile for it to switch across the English, if at all, so you can look at Google Maps to find “Kyoto” in Japanese and match the Japanese characters for your departure timing. This will list what platform your bus departs from.

Or, there’s an information desk in the waiting area and you can ask there!

So once you’ve figured out where to go, if you have extra time, you can stop by the convenience store for snacks and drinks for the bus ride to Kyoto! There’s a convenience store located right in the waiting area, although chances are there will be a long line. So it could be best to do your snack shopping before you get to the bus terminal. (There will also be a few rest stops on the bus ride from Tokyo to Kyoto where you can buy some snacks, a bit on that a little later.)

There are also vending machines around for drinks.

Then once it’s time, you can follow signs to the bus boarding point!

You’ll show your bus ticket to the driver.

There’s a place to put luggage underneath the bus.

Get on the bus to Kyoto!!

This particular long distance bus was more of a “luxury” bus in that it came with a blanket and slippers. All seats had a small aisle, even both window seats, and the window seats also came with a curtain on the aisle side. The seats also reclined slightly more than normal. There were outlets to charge devices.

This bus also had a bathroom on board. You took steps to go down to it.

How many times does the bus stop at rest areas?

The bus I was on stopped 3 times at a rest area.

These are highway rest areas, and they have bathrooms, convenience stores, vending machines, and one even had a bunch of street snack stalls. There are also some areas that can make for souvenir shopping. It’s worth going in to the shops to stretch your legs and have a look around if it’s your first time in Japan!

There were also fast-casual vending machine restaurants, but you probably won’t have time for that! The stops were 20-30 minutes. The bus driver will announce the time of departure once you arrive at the rest area, and it was announced that no passenger checks are made and that they will leave without you if you’re not back.

Enjoy the bus ride from Tokyo to Kyoto!

Early on, in the first few hours, it was announced that the bus was delayed from the schedule (likely due to traffic) and that the estimated arrival time to Kyoto will be 20 minutes delayed. But, as it turned out, the bus actually ended up arriving to Kyoto Station 20 minutes ahead of schedule! 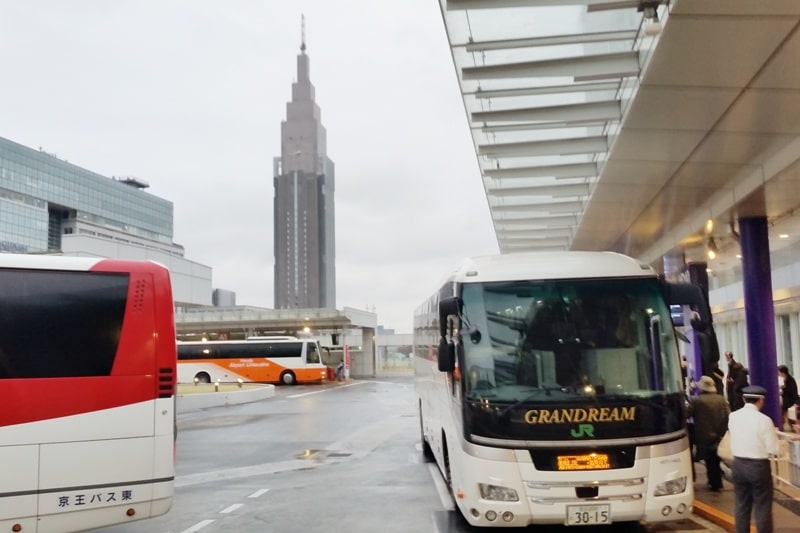