So you are off to Ginkakuji Temple!

…to Ginkakuji Temple! (aka the Silver Pavilion)

Being a major tourist attraction and UNESCO world heritage site in Kyoto, getting to Ginkakuji from Kyoto Station is relatively simple!

The short version is…

Show up to Kyoto station and get on the next bus to Ginkakuji! There are signs at the Kyoto bus station telling you where the bus to Ginkakuji will arrive. Once you get off the bus, you will likely see signs pointing you in the direction of Ginkakuji as well. 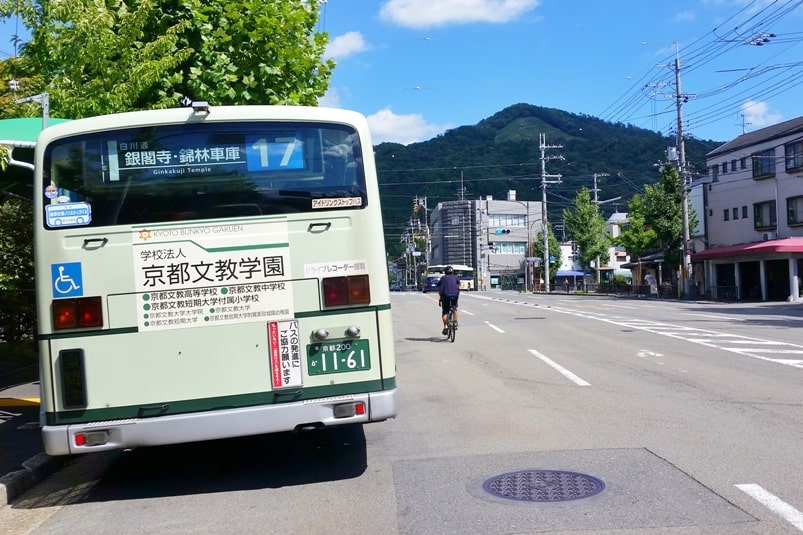 There are a few of bus stops located about a 10 minute walk from the Ginkakuji Temple, so going by bus can be a good way to get there from Kyoto Station.

Which bus stop you end up at will mostly depend on which bus you end up on!

I went to Ginkakuji (and the tea room!) as a part of doing the philosopher’s path walk, and I also went past Ginkakuji when I went for the Daimonji-yama hike as well.

On the day I did the hike, I went for a visit to the Fushimi Inari shrine first, and you can also see how to go from Fushimi Inari to Ginkakuji.

So once you’re at Kyoto station, you’ll head to the bus area.

There’s an information sign board that you can look at to figure out where to wait for the bus to Ginkakuji Temple.

There is also a section specific to top tourist attractions.

There are also people there who are there to help you, so you can ask them too!

So then you’ll head over to the platform for Ginkakuji Temple, and then wait for the bus to arrive!

As a popular tourist spot, there is a chance that there could already be a long line which could also make for a crowded bus.

So just be mentally prepared. 😉

See more tips for getting around Kyoto by bus (even without a bus pass).

What about the bus timings?

Being a major tourist attraction, the bus timings are frequent enough.

This means that you don’t really need to be as concerned about specific bus timings, as you likely won’t have to wait too long for the next bus to come no matter when you show up to the bus station.

So basically, just show up to Kyoto Station and wait for the next bus to Ginkakuji Temple!

Can you get to Ginkakuji by bus with a JR pass?

There’s a JR bus in Kyoto, and this is the only bus that you can use your JR pass to get around Kyoto by bus.

The JR bus route is a bit more limiting, and Ginkakuji Temple is not one of the places that’s on the route.

Google Maps works well for getting around Kyoto if you’re not using a JR pass.

If you want to see what your options are for getting around using only a JR pass, check out the app JapanTravel Navitime. There’s an option there to filter “tourist pass” so that you can see the best way to get around using your JR pass.

The closest train station to Ginkakuji is about a 30 minute walk. And this isn’t a JR train so you wouldn’t be able to get there using your JR pass.

But depending on your timing, Google Maps may tell you that the quickest way to get to Ginkakuji is by taking the train first, and then another bus to get to the bus stop near Ginkakuji.

But the easiest would probably be just to wait for a bus bound directly for a bus stop near Ginkakuji so you don’t have to deal with transfers.

How long does it take to get to Ginkakuji?

Whether you go by just the bus or by combined train and bus, it’ll likely take just under an hour to get to Ginkakuji, including the walk time for that final stretch to get you to the temple entry.

Be sure to stop by the tea room for matcha tea at Ginkakuji Temple!

Plan out your 5 days in Kyoto with Ginkakuji Temple!