So all the train stations on the Sagano scenic railway line are “Torokko” stations, and the Hozukyo Torokko station is one of those stations!

If you’re looking for some time away from the crowds in Arashiyama and Kyoto, stopping by Hozukyo station can make for a nice walk in the mountains!

If you want to take the Sagano scenic train, the best places to get on the train would be at the Torokko stations of Saga, Arashiyama, or Kameoka. These all have JR train stations nearby for easy access.

A visit to the Hozukyo station isn’t an ideal boarding station for the scenic train, but it just makes for a nice detour.

Hozukyo station as part of one day Kyoto itinerary

I went to the Hozukyo Torokko Station as a part of my one day in Arashiyama and Sagano:

This is what the Hozukyo station part of my itinerary looked like:

In simple terms – I went from Kyoto station to the Kameoka Torokko station to get on the scenic train, but first with a stop at Hozukyo station along the way!

Here’s a bit of what my day looked like around Hozukyo Station!

To get to any of the train stations on the Sagano scenic railway, you can take a JR train.

There are signs that tell you which platform to go to for the Saga-Arashiyama bound train.

Then, get on that train, and get off at Hozukyo station!

This will be about a 20 minute train ride.

Once you’ve made it to the Hozukyo JR station, you can start walking towards the Hozukyo Torokko station.

The roads are narrow and there may be cars coming through, so it’s important to be careful when you’re walking and be mindful of the sounds of vehicles that may be approaching.

Right before you get to the Hozukyo Torokko Station, there’s a sign with the train timings.

This will tell you what time the next Sagano scenic train will be passing through.

Then you can decide if you want to stick around for the next train to come!

You could get on the train from here, but to do that you’ll just have to make sure you buy tickets ahead of time.

This doesn’t appear to be a manned train station and you don’t buy the Sagano train tickets from a machine, so I don’t think there’s any way to buy tickets when at the Torokko Station. 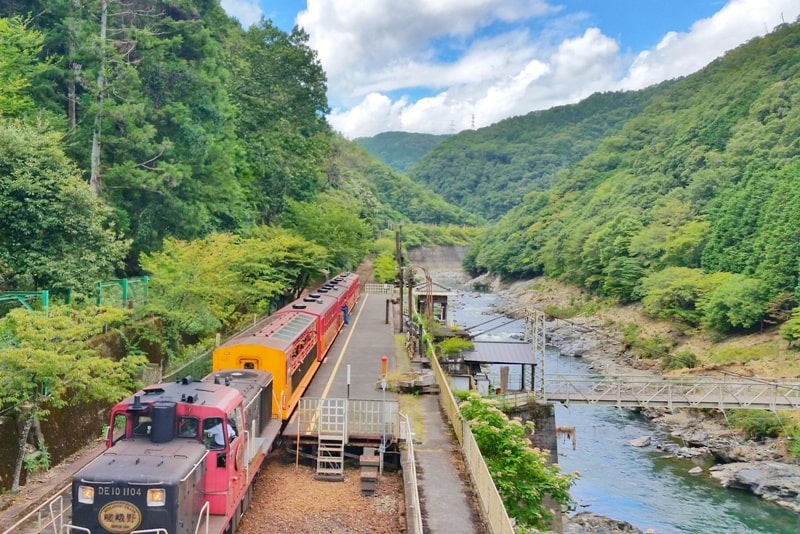 Once the train passes, you can head back to the Hozukyo JR train station.

And you can also make a slight detour by heading down to Hozugawa River!

In the morning before you leave for Arashiyama and Sagano, you can stop by a convenience store to stock up on snacks and food… and drinks!

Then you’ll be able to have a picnic right along Hozugawa River!

Along the side of the road between the two Hozukyo stations, you can find a small opening.

It’s here that you can find (steep!) stairs.

Go down at your own risk!

It’s probably best not to take these stairs if it’s been raining, as it could be slippery and dangerous.

Walk back to Hozukyo JR station

And then next up was getting to the Kameoka Torokko train station to board the Sagano scenic train to Arashiyama!

This meant taking a JR train from Hozukyo to the Umahori train station.

Once at the Umahori station, it was about a 10 minute walk to get to the Kameoka Torokko station.

That’s where I bought a train ticket to Arashiyama on the Sagano scenic train! (aka Sagano romantic train)